Viber Updates its Features for iOS

Viber Updates its Features for iOS

For a significant period now, Viber has been one of the best apps for messaging and calling. As a very popular app among the customers, Viber continues to develop new features on the various devices. Lately, the officials came with the announcement about improvement on iOS Viber version. The latest news has to do with chat option and correction of conversation gallery.

Namely, the improvement done by the provider enables users to see all the images and videos posted in a conversation on the specific place. Everything you need to do is to choose a gear icon on your phone screen and click the option labeled Media. It will lead you in a conversation gallery, and you will be able to see all the photos and videos shared at any time of the year.

Except this, Viber has improved features related to group chat. Now you could easily check group activities and find out who liked your post as well as who is the most active in the group. In addition, there is an improved search option which will help users to find any information they need.

In terms of the new features, Viber has also introduced 3D touch version, which could help you to access chat conversation easier. When you open the app on the iOS screen, there will be the most recent chats you have done. It is a very good option for users, as they will not have to lose the time in searching their friends. This is an especially well-done feature for those who have a number of Viber contacts on the iOS devices.

However, this is not all from Viber developer as it also created a multitasking option on iPad. On some specific iPad versions you could easily click a Slide Over option, in order to view Viber when you are on the other app. Also, there is a one more option which makes possible to open Viber at the same time with another app on your iPad. This is so-called Split View option and it is available  on iPad Pro, iPad mini 4 and so on.

The upgraded version of Viber app is available for free in the app store on your iOS gadgets. In addition, Viber enables its users to spend time with popular games as Backgammon, Viber Rude Rider and Viber Wonderball. 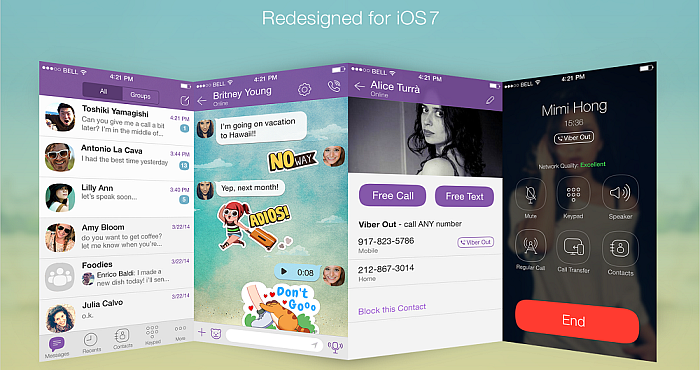