What does the Viber App Do?

What does the Viber App Do?

In this new world of technology, people are searching for latest and fastest apps for their Smartphone. One of those apps is the Viber app. Viber app is developed by the Viber media; it is a medium through which you can easily and quickly transfer data, photos, videos and media messages to other users. This app is available for Series 40, Bada, Android, Mac OS, BlackBerry Os, Symbian, iOS, Microsoft Windows and Windows Phone. There is also a Linux version, which is being developed, but a beta version is released for public. The application works on Wi-Fi, 3G and 4G networks.  First, you need to install the app on your phone, if you want to operate it in a desktop system. On May 7th, it reached nearly 200 million users. This application mainly focus on how easily you can transfer the data so the designers designed it to be user friendly and the total outlook of the app is very nice.

It was founded by four members: Igor Megzinik, Talmon Marco, Ofer Smocha and Sani Maroli. The CEO of the company was Talmon Marco.

The functionality differs on different platforms, while Android and iOS are the first platforms to get access to new features. This app includes photo sharing, video sharing, text messaging and you can also have video calling, but this facility is only applicable in Android, iPhone and Windows Phone. Windows 8 phone only allows HD voice transferring. The user interface has tab bar, which gives access to recent calls, messages, keypad and contacts. As soon as you install the app, it automatically generates an account and use your phone number as the username. You don’t have to add contacts as it automatically synchronizes with the address book of your phone. The latest version is the Viber 2.3 which uses default images and smiles.

This application is now available on Mac OS X and Windows. The company also officially launched a new application known as the Viber Out; this application allows you to call landline and mobile numbers. So, the users can call without installing the Viber app. It was launched in November to help the victims of Typhoon Haiyan in Philippines. If you want to use this app then you have to go to the ‘More’ option and then opt for Viber Out. You don’t need an update in order to use this feature. 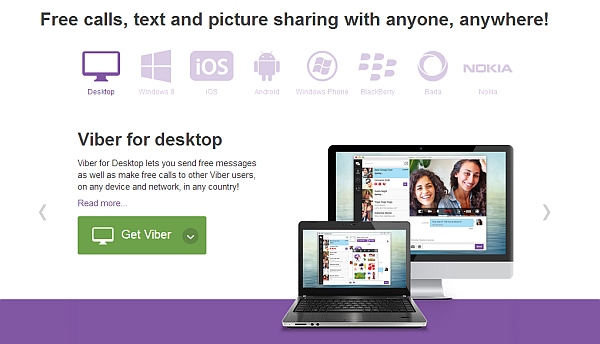